"A" is for Excellence

VIOLINIST LARA ST. JOHN’S RECORDINGS include works by John Corigliano and Matthew Hindson, a collection of folk tunes and improvisations from eastern Europe, and a pair of improbable yet uplifting CDs as part of Polkastra, an ensemble that merrily re-channels a variety of songs, classical included, into two-four time. 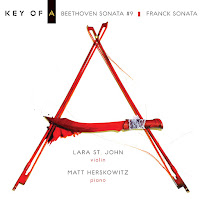 Her newest recording, “Key of A,” pairs sonatas by Beethoven and Franck, which would seem to be much too staid for her – until you reach track two, the second movement of Beethoven’s “Kreutzer Sonata.” It’s a theme and variations, each section marked with a repeat. But those repeats don’t go as marked: the second iterations feature variations on the variations, usually with trickier technical challenges for both violin and piano.

“That’s basically how it would have been done in Beethoven’s time,” St. John says with a laugh. “He wrote this for himself and for Bridgetower, who by all accounts was totally insane – so they would never have done a variation exactly the same way twice.”

History notes that George Bridgetower – a Polish-born, Afro-European violinist – was indeed an impulsive fellow. Forced to read from the sonata’s manuscript over Beethoven’s shoulder during its 1803 premiere, Bridgetower made some improvised alterations that delighted the composer. That they later had a falling-out had more to do with a woman than with music, and that’s why the composer changed the work’s dedicatee to the stuffy Archduke Rudolphe Kreutzer, who dismissed the sonata as too difficult and never played it.

“I’m lucky,” says St. John, “to have a partner who’s better known as a jazz pianist. It’s not as if we went slamming into Coltrane or something, but era-appropriate improvisation is what they would have done back then.”

Matt Herskowitz, a graduate of the Juilliard School and the Curtis Institute of Music, branched from classical to jazz early in his career, and is known for the effortless fusion of these elements in his recitals, recordings, and compositions. He previous recording with St. John is the 2015 release “Shiksa,” a collection of arrangements and originals based on folk songs from eastern Europe, one of which is Herskowitz’s own “Nagilara,” inspired by “Hava Nagila.”

Speaking of the Kreutzer Sonata, St. John recalls Herskowitz observing, “For that big first C major solo in the piano, Beethoven had to write something just to put it on the page, but he wouldn’t necessarily have played that every time. Because it’s such a cadenza kind of thing, he would have gone all over the place. So that’s basically what we did.”

But this approach has its drawbacks. “We made it really hard for ourselves. All of that octave-jumping and variations of the variations have made it a little nerve-wracking to play it in public.”

The other big piece on the album is the Violin Sonata by César Franck, a work written in 1886 as a wedding gift for the virtuoso Eugène Ysaÿe. It embodies the composer’s predilection for unifying a piece by carrying thematic material from movement to movement – in this case, four movements that alternate tempo and mood. It’s one of the most-performed and -recorded works in the violin repertory, which is all the more reason to seek out St. John and Herskowitz: Their re-imagining of this work isn’t done through unexpected embellishments but rather a ground-up look at the guts of the piece, finding passion and soul in moments that previously seemed merely transitory, and building larger arcs of emotional payoff than I’m used to hearing.

“Matt and I have been playing together for a decade now,” says St. John, “and I thought the Franck is something that we ought to do together. What’s really amazing is that he comes at these things with no preconceived notions because he’s a jazz pianist. I think it’s awesome to have a blank slate, in a way, where we can come up with ideas together without any preconceived notions. And I don’t think there’s any style he can’t play.”

She notes that Romantic-era works can accumulate a lot of interpretive tradition, “and sometimes I find it’s tradition for tradition’s sake. I played the Schumann piano quintet a couple of years ago – for some reason I’d never played it before – and I was looked upon as crazy for asking, ‘Why are we doing a ritard here? There isn’t one.’ And I was told, ‘It’s tradition.’ But tradition with no reason doesn’t make any sense. I didn’t want to do the ritard, but, of course, in concert we were completely un-together because everybody else ritard-ed.”

“Key of A” finishes with a delightful morceau: Fritz Kreisler’s “Schön Rosmarin,” a waltz intended to evoke a bygone Vienna, given an extra lilt from some tasteful improvisatory additions.

St. John began playing the violin when was two, and made her first appearance as soloist with orchestra two years later. After touring Europe as a prodigy, she entered the Curtis Institute at 13. She has gone on to perform with major orchestras and present recital programs throughout the world. She founded her own recording label, Ancalagon, in 1999.

Ironically, the Canadian-born violinist lives in New York, while the New York-born Herskowitz is a Montréal resident. “Matt and I did a cross-border Franck. It’s on my YouTube channel. He played his part in Montreal and sent it to me, and I recorded my part here and stuck it on top of that.” It’s an exciting performance that makes the many technical challenges look easy, and a nice taste of the new album.

Meanwhile, pandemic life is exerting its challenges. “Just before this happened, I was on what probably was the last flight back from Europe before they closed all the airports – and made a huge petrie dish of all the people stuck at the airports.” So constantly is she on the go that she reckons she hasn’t been home in Manhattan for more than a week at a time during the past few years. “At first it was kind of nice to have days that are like each other. But I’d much rather be working, and for me work is travel. Until we can travel and have people to perform for, I don’t really see ... ” She trails off into a gloomy pause. “I don’t know. I’m trying to stay positive, but, honestly, it’s really hard.”

She is especially disappointed to give up on a July 14 performance that was part of the Naumburg Orchestral Concerts series in Central Park – a series that would have moved to Temple Emanu-El on 65th Street, while the Naumburg Bandshell is repaired. “It was an all-French program for Bastille Day, with Marc-André Hamelin and the Ulysses Quartet. We were going to do the Debussy Violin Sonata, the Ravel Quartet, and Chausson’s Concerto for Violin, Piano, and String Quartet. We’re still hoping that we might be able to go up to Boston, where Marc-André lives, and do it at the WGBH studio, because it’s big enough to distance everybody while we broadcast it live. We’re going to try, unless things gets worse in Massachusetts. And the Naumburg Society is being super amazing – they’re still paying all the musicians who were supposed to play for them this summer. That’s one good thing in a world of so much bad news.”

As for the burgeoning world of livestream performances, St. John sounds a cautious note. “There seems to be a little bit of a backlash. Some musicians are saying, ‘You’re putting your stuff up for free, you’re going to devalue us,’ while other musicians are saying, ‘We have to create, otherwise we’re dead!’ With any luck there will be a happy medium where there can be tickets offered to help musicians earn some kind of livelihood for the foreseeable future.”

Not that she’s been wholly resistant lately to the lure of self-recording. She recently made a cooking video for violinist.com, in which she notes that she was knighted, five years ago, as a Chevalier du Tastevins – Knight of Burgundy – recognizing her passion for the native wines. “I did beef bourguignon for them, and I used a bunch of songs from Burgundy for the background.” It’s a fun video that proves she’s as accomplished behind the stove as she is behind a violin.

She’s also an entrepreneur, having founded her own record label, Ancalagon, over a decade ago to give her artistic control over all aspects of her recordings. She named the label after her pet lizard, itself named for a dragon in Tolkien’s “Silmarillion.” (And she continues to keep an iguana as pet, the current critter a four-footer nicknamed Baby Cain.)

“Key of A” joins a dozen other recordings on her label (you can see and buy them here), although her ambitious plans for more have had to be scaled back. “I was hoping for my next recording to be orchestral, so that’s going to have to take a back seat for now. There may be something that Matt and I could do. We were thinking of doing a whole bunch of Irving Berlin and Gershwin and stuff like that – Jewish composers who wrote swing music – and call it ‘Schwing.’

As for the business side of the label, “All I’ve wanted from it is to have enough money to do the next project. To keep things just in the black. Right now, I’m pretty much managing to do that. It keeps itself going, which is really all I wanted.”
Posted by B. A. Nilsson at 11:31 AM