From the Vault Dept.: I wrote this review little over a year ago, and I don't remember why. It wasn't published (until now), but it's a nice salute to the work of one of the most original writer-directors at work these days. I'm particularly looking forward to Iannucci's forthcoming film of "David Copperfield" (and you can see Iannucci pay tribute to Dickens here).

THE MOST TELLING MOMENT in Armando Iannucci’s film “The Death of Stalin” occurs as the dictator’s body is laying in state and the people – some of whom have traveled a great distance – throng past the bier. They are shocked and reverential, the uncertainty in their faces and manner an indication of the ideological lockstep in which they’ve been trained to march. Clearly, the cult of Stalin was wildly successful in its oppressive zeal. 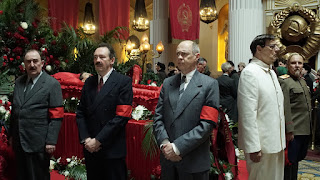 We see them herded into this crowded space; previously, we’ve seen the mourners herded onto trains and then massing the city’s streets, many of them shot by overzealous security forces. Confinement becomes a central motif of the movie, whether it be the lonely confinement of a rape victim in prison or the ideological confinement of Vyacheslav Molotov (Michael Palin), who continues to cling to the delusion that his wife was guilty of Stalin-invented charges even after the dictator’s demise.

It is 1953, and Stalin’s Central Committee must name his successor. These men are the supposed loyalists, the ones who endure too many late nights watching John Wayne movies with their leader, but who also deal in fear – both in its administration (Simon Russell Beale, as the loathsome Beria, casually directing family executions) and as its target (Molotov brings a chew toy to a meeting in a car so that his dog will bark over the conversation).

This process sets into motion the kind of political machinations we’ve come to expect from Iannucci’s BBC series “The Thick of It” and feature film “In the Loop,” but here the stakes are far higher. Although the latter used the run-up to war as its impetus, there’s a more immediate sense of doom inhabiting every character in this latest movie.

Which becomes an even more deft setting for Iannucci’s dark comedy. When Stalin (played as a lower-class hooligan by Adrian McLoughlin) demands a recording of a just-finished, unrecorded concert, Radio Moscow’s panicky director Andreyev (Paddy Considine) is only just able to keep his wits about him as he instructs musicians and audience to remain in place. But his panic so infects Spartak Sokolov, the conductor (played by Justin Edwards, “The Thick of It’”s Blinky Ben), that he faints in the background and hits his head on a fire-bucket.

As a gag, it wouldn’t have worked as well were it moved to the foreground. Iannucci frames this film not only within its two-dimensional boundaries but also with a keen sense of balancing foreground and background composition and activity – a lesson stressed by director Alexander Mackendrick (“The Ladykillers”) during his tenure as a professor at the California Institute for the Arts.

In “The Death of Stalin,” we’re witnessing the competition between Beria and the more mild-mannered Khrushchev (Steve Buscemi, in a role he was born to play) to assume a leadership position that ought to be granted to chief deputy Georgy Malenkov (Jeffrey Tambor) – but Malenkov has played second fiddle for so long that he is incapable of decisiveness, another form of confinement. When Beria and Khrushchev witness the arrival of Stalin’s daughter, Svetlana (Andrea Riseborough), the race becomes literal as they race to be first to greet her. Actualizing a metaphor in that way could seem heavy-handed, but Iannucci layers each scene with enough absurdity that there’s a plausible inevitability about the result, much like a well-crafted Laurel and Hardy sequence.

By the time the Red Army’s Field Marshal Zhukov arrives, relatively late in the film, the threshold of absurdity is such that Jason Isaacs’s Liverpool accent makes perfect sense for the role – a far cry from Isaacs’s Lucius Malfoy, but setting us up for a more cheerfully malevolent character. (Iannucci made the much-discussed decision to let the actors speak with the native voices, hoping they’d therefore not distract from the story. He was right.)

Although the fabric of the situations informing the story is densely-woven, each event is motivated by the action or intent of the characters. What may seem fatalistic is always a consequence of human frailty, which then provokes the treachery of an innocent-seeming environment, such as the recording studio in the movie’s beginning; Stalin’s dacha, where the death takes place (sparked by an incident at that studio); and, ultimately, in the great hall where we see the funeral itself.

Alan Partridge wreaked inadvertent havoc from the confinement of a radio studio in an earlier Iannucci creation. In a setting that echoed the Leveson Inquiry, the penultimate “Thick of It” episode played in a claustrophobic courtroom. But the spine of fear informing “The Death of Stalin” offers the potential for treachery in spaces ranging from hallways to horse stables.

Iannucci made use of multiple cameras and hand-held shooting to give a documentary feel to much of his television work, but the camera in “The Death of Stalin” is more observer than participant. Even so, it’s busy. As the tempo of a scene quickens – and the script is excellently paced – multiple levels of action vie for attention, with an accompanying soundtrack that’s similarly complex.

It’s the work of Christopher Willis, whose credits include Disney programs and other kids’ fare. Although music by Tchaikovsky appears (alongside works by Mozart and Chopin), Willis’s score captures the sense of dread that informed Shostakovich’s works after he’d been denounced by Pravda (meaning Stalin) in 1936. Even after that composer’s supposed rehabilitation with his Symphony No. 5, something detached and forbidding lurked behind the most triumphant-sounding fanfare, and Willis captured it beautifully. Although it’s probably more accurate to say: dreadfully.