The Art of the Cello

THERE’S A SCENE in the 1947 movie “Carnegie Hall” in which cellist Gregor Piatigorsky performs Saint-Saëns’s “The Swan” while surrounded by a half-dozen lady harpists plucking the accompaniment. He was a star cellist at a time when the instrument was still struggling to assert star status. And, as with all great soloists, he made it look easy. He was tall – tall enough to pose for a gag photo with the cellist hoisted under his chin like a fiddle. He had a chiseled face that seemed austere in repose, but lit up with his native merriment when he was at his ease. 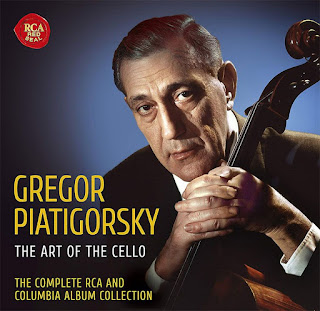 You’ll get an excellent idea of the look of the man by browsing the photos at the Piatigorsky Archives at the Colburn School. Although the cellist died over 40 years ago, his widow lived to be 100 – and it was only after her death in 2012 that his collection of photos and letters; transcriptions, original compositions, and scores; books, concert programs, and audio – and more – went to the school thanks to the Piatigorsky Foundation, an organization founded by the cellist’s cellist grandson (and which also performs the admirable mission of offering live performances to underserved areas).

With some 19,000 items to deal with, the Colburn School put to work “a team of experts consisting of two archivists, two musicologists, a Russian translator, and a French translator” who collected their results in a 200-page inventory. Some 3,000 of those items were digitized, and the website gives an excellent taste of the breadth of those holdings.

The many photos alone are a fascinating look at Piatigorsky’s progress, but there’s also a timeline that reminds us how many significant works he commissioned and premiered, and programs that testify to his constant travel. He’s also remembered for his teaching – he was on the USC faculty towards the end of his life – and some interview excerpts remind us how insightful and amusing he could be.

Because of rights issues there are few examples of his playing, but while settle for excerpts when you can have it all? Or most. “Gregor Piatigorsky: The Art of the Cello” is a 36-disc set that collects his Columbia and RCA  recordings. His first trip to the studio was in 1923 for a series of short pieces; by the 1930s he was recording sonatas by Beethoven and Brahms with the likes of Schnabel and Rubinstein. He signed with Columbia in 1940 and moved to RCA a decade later. The only pre-1940 recording here is his first essay of the first cello sonata by Brahms, with Arthur Rubinstein, with whom he’d record both Brahms sonatas in 1966.

Those are among the many items here that have rarely fallen out of print, which also include the Dvořák Cello Concerto (two versions: with Ormandy in 1946 and Munch in 1960), Strauss’s “Don Quixote” with Reiner in 1941 and Munch in 1953 (the composer named Piatigorsky his favorite performer of the piece), the short-and-sweet Saint-Saëns Cello Concerto No.1 (twice), the trio recordings (Mendelssohn, Ravel, Tchaikovsky) with Heifetz and Rubinstein – and, for that matter, everything else with Heifetz, which includes the Brahms Double Concerto and a variety of excellent chamber music recordings.

There’s a rip-snorting Mendelssohn Octet, emotionally charged but shorn of the sentiment that too often infects it, with Heifetz very much in the driver’s seat; the Schubert C-Major Quintet gets the passion and rowdiness it demands; there’s mystery in the Frank Piano Quintet and a solid Russian melancholy in Arensky’s Piano Trio, where even the second-movement waltz sounds lonesome.

Piatigorsky and Heifetz and violist William Primrose recorded all of Beethoven’s string trios over the years, and it’s a delight to have them all together. Also fascinating are the several duos with the violinist and cellist alone, from a high-spirited Boccherini sonata to moody works by Kodaly and Martinu. Piatigorsky and Stravinsky collaborated on a cello-and-piano version of a suite from “Pulcinella,” named “Suite Italienne”; Piatigorsky and Heifetz turned it into another duo that’s included here.

The cello-piano recording has been out of print for ages, although it snuck onto Sony’s website as a download a couple of years ago. With Lukas Foss at the piano, the recording also includes a definitive version of Debussy’s Cello Sonata, along with shorter works by Busoni and Foss. And there’s a bonus: Beethoven’s variations for cello and piano, based on three themes (one by Handel, two from Mozart’s “Magic Flute”) with twelve variations apiece. Delightful works, recorded with Foss, originally issued on an RCA LP set that included all five Beethoven cello sonatas with pianist Solomon Cutner.

You won’t find those sonatas here, however. They were recorded for HMV when that company (in England) was affiliated with RCA, but the two parted ways and HMV’s catalogue went to EMI, which hasn’t seen fit to release this set, unless there’s another entity in this chain I don’t know about. In any event, Testament brought out a set. They’re a small reissue house dealing in prestige items, so they’re licensed for limited-run pressings and it’s now out of print. As of this writing, however, it’s available at a good price from Berkshire Record Outlet. It's worth acquiring.

But there’s plenty of formerly elusive material in the Sony set. You at least get Beethoven’s Cello Sonata No. 5, with Piatigorsky’s longtime collaborator Ralph Berkowitz at the piano. The cellist was a great friend of Paul Hindemith and here you’ll find his recording of the 1948 Cello Sonata (there’s a Piatigorsky performance of Hindemith’s Cello Concerto available in a box set from West Hill Radio Archives). Other sonatas include those by Barber, Chopin (twice), Prokofiev (twice), Shostakovich, and Strauss.

Piatigorsky arranged some movements from Haydn’s trios into a four-movement Divertimento in D. It was orchestrated by Ingolf Dahl and recorded as part of the Heifetz-Piatigorsky Concerts series (with Heifetz as concertmaster); here you’ll also find its original incarnation in a 1942 recording with pianist Valentin Pavlovsky.

And then there are the short works, the “itsy-bitsies,” as Heifetz termed them. Piatigorsky made many arrangements of these morceaux, two of the more unusual of which pair him with contralto Marian Anderson in “Carry Me Back to Ol’ Virginny” and “My Old Kentucky Home.” Fritz Kreisler recorded with John McCormack, Heifetz recorded with Bing, so it probably made sense on paper – and it’s very compelling on disc. There are also well-known pieces in cello-piano arrangements by Debussy, Fauré, Granados, Prokoﬁev, Rachmaninoff, Rimsky-Korsakov, Schumann, and Tchaikovsky. Piatigorsky recorded several works by Webern, most of which never were issued, but here are the Drei Kleine Stücke, Op. 11, with pianist Charles Rosen.

But you want that Saint-Saëns “Swan,” of course, and here it is – minus the harpists, I’m afraid (that one is also on the West Hill set), but with pianists Valentin Pavlovsky (1941) and
Ralph Berkowitz (1950).

The remasterings certainly sound sufficient to the period of each recording, and the box is presented as an Original Jackets set wherein the 36 discs are cardboard-sleeved behind original artwork. But the programming isn’t always slavish to the sleeve; it’s the enclosed booklet that gives the correct details – although it lacks listings by composer and by recording date. Still, the set is long overdue, reasonable priced, and essential to any fan of the cello and its recorded history.


(You can find my review of that West Hill set here and a recollection of seeing him in concert here.)