A RECENT ISSUE of a classical-music magazine sports a letter from a reader who is aggrieved by the practice of singers to perform Baroque and earlier works with well-tempered interval values. Dramatic impact would be heightened, she argues, if those leading tones led a little more acutely, as Nature and the composer intended. Until the composer was Bach, who created the most famous exercise in well-tempered tuning.

Tune a keyboard from one note to the next and you’ll end up with extremes wildly out of tune with each other. This is a simplified explanation of a natural phenomenon that didn’t bother musicians much until more sophisticated instruments allowed the ability to play in a range of key signatures. The twelve-note scale to which western listeners are accustomed produces 24 major and minor keys, so Bach celebrated this by writing a set of preludes and fugues in each of those keys. Twice.

It’s a pedagogical exercise, sure, but it’s also music by Bach, which means that it offers transcendent rewards. His preludes offer moods; his fugues fuse emotion with time. A fugue opens with a sequence of notes that’s not quite a theme because it exists in order to reflect upon itself as successive iterations of the sequence occur. Thus, there’s always a characteristic striking enough to allow even the unaccustomed ear to pick out the not-quite theme as it appears and appears again in different registers while surrounded by accompanying musings.

Take the fugue in F-sharp minor, number 14 from Book One. Two quarter-notes climb to a dotted half-note that’s tied across a barline to another quarter-note, after which the climb continues, eventually running from F-sharp to A and back down the melodic minor scale to F-sharp again. On a piano, with its ability to sustain notes, that dotted-half-to-quarter-note hangs in the air as a fading tonality. On the harpsichord, which plucks its strings, a sense of silence ensues, a dramatic caesura that will inform each reappearance of that not-quite theme.

As performed by Mahan Esfahani, Bach’s fugues became architectural marvels, each a musical chiaroscuro in which silence and sound were equal contributors. His first of two recitals at Columbia University’s Miller Theatre, which took place November 8, included the last half of Bach’s Book One and the premiere of a piece commissioned from George Lewis, “Timelike Weave.”

Esfahani notes that his mission is “to rehabilitate the harpsichord in the mainstream of concert instruments,” an admirable task. Despite the efforts of musicians ranging from Artie Shaw to The Beatles, the harpsichord still is too-often exiled to early-music ensembles, where it runs the risk of being usurped by the upstart theorbo. Mainstream appeal requires a musical variety, so Esfahani is on the right track by mixing up his programs as he does (his second recital paired Bach with Berio, Takemitsu, Bryars, and Haim Alexander).

There’s a unity among the components of the Bach books, Esfahani observes, and his grouping of the twelve confirmed that. Not only is the rising progression of key signatures exciting in its own subtle way, but there’s also a compelling variety of tempos and colorings that work to a cumulatively satisfying effect. And there’s another by-product of equal-temperament tuning: different keys have different emotional characters.

And then there’s the matter of interpretive intrusion. I tend to prefer performances that are more metronomic, abjuring those who (as I see it) seek to impose “personality” on pieces that lose effectiveness when torn apart too much. But Esfahani puts his stamp on Bach with considerable thoughtfulness. When at times he seemed reluctant to let go of a prelude’s closing moments, it turned out to be an effective transition to the brisker fugal dramatics that followed. And his awareness of the power of silence extended to the spaces between preludes and fugues, and fugues and the successive preludes, all shrewdly, deliberately paced.

Then there’s the trill. It prolongs particular voice on the harpsichord, as at the opening of the slow Prelude No. 16 in G Minor, wherein a measure-long trilled G colors the left-hand finger-exercise going on beneath. Trills are uncertain statements, neither this note nor that, but promising resolution, which is why they’re so common in closing moments. Esfahani’s trills breathe with such flexibility that they seem almost sentient. Perhaps that explains the aforementioned reluctance.

He deftly worked the registers on his instrument to further color the components – subtle colorations, at times, but effective. A set like this requires much listener concentration, so the palette needs to be inviting.

Not surprisingly, the final prelude and fugue combo, in B Minor, offer an ambitious finish. The prelude prepares us for the harmonic journey even as it grounds its character in running eighth notes; the three-bar fugue theme takes us into a realm of half-steps, as if cocking a deliberate snoot at the constraints of earlier tunings. It’s a long, ambitious fugue that fools us into thinking it’s about to run off the consonant rails, and Esfahani built it to a satisfying finish, dramatically delaying the Picardy third that signals its end.

And then ... it’s funny how you can share a sense that something more is needed. I had this crazy idea that it would be nice to finish with the C Major Prelude, just the prelude – and it didn’t even seem extraordinary that this is what Esfahani did. It was unnecessary but pleasant, like an after-dinner espresso.

In terms of pure time, the second half of the program was much shorter, consisting as it did of a single fifteen-minute work, but Lewis’s “Timelike Weave” had a mystical density about it that seemed the temporal equal of what had come before. What were running eighth notes in Bach became a fast flurry of runs and trills – unusual sounds for the instrument, or so it seemed at first, but quickly revealing an insightful approach to the harpsichord’s capabilities. The lines grew more vertical as the piece progressed, and sounded punishingly difficult to play, reminiscent of the player-piano works of Nancarrow that were intended only for mechanical reproduction and carrying the rhythmic complexities of Nancarrow’s work.

Lewis covered the gamut of both manuals of this keyboard, exploring the contrasting timbres of its various voices, soon slipping into a Cowell-gone-mad mess of clusters that end up sounding discordant, yes, but almost politely so. Syncopated patterns emerged in and around the frantic runs, snowing that Lewis, no less than Bach, knew how to paint with silences (even if they were comparatively atomic) and Esfahani, of course, knew how to realize them.

He’s no stranger to new-music controversy, having incited a rebellion in Cologne two years ago by playing a (not so new, actually) Steve Reich piece before some Sunday-afternoon punters who gave rude voice to their objections. The Columbia audience, although slightly thinned after intermission, greeted the premiere with justified enthusiasm. 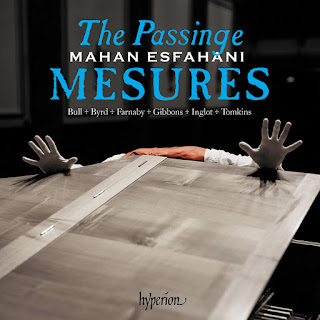 Although he’s yet to tackle recording Bach’s 48, Esfahani recently came out with a CD of works that answers a question posed by one of his mentors: “Would a culture that produced Shakespeare have produced merely second- or third-rate music?”

“The Passing Mesures” – it takes its title from a piece by William Byrd – is a collection of early 17th-century keyboard music from Great Britain. Familiar works like Gibbons’s “The woods so wild” and Dowland’s “Can she excuse?” are here, although the Dowland is actually the subject of someone else’s variations, which include a nod to the Gibbons piece. So it goes with this program, chosen both to illustrate the virtuosity of the virginalists of the time and the crunchy harmonies to which they were drawn.

Giles Farnaby is represented by four works, including the odd, hypnotic variations called “Wooddy-Cock.” Five works, actually, if you count his son, Richard, among those achievements – and Richard’s “Nobodyes Gigge” is another oddball, delightful work here, a dance that has captured the fancy of many instrumentalists over the centuries.

Byrd and Bull are represented by pavans and galliards, Thomas Tomkins by “Barafostus Dreame,” another set of inspired variations. And so much more. There’s a sense of improvisation throughout, as you might have heard in an informal setting back in the day. Esfahani is as skilled at programming as he is at performing,which says a lot, indeed. A recording like this leaves no doubt that the harpsichord is a mainstream instruments.

Mahan Esfahani
The Passing Mesures
Hyperion Records
Posted by B. A. Nilsson at 11:17 PM