AT THE CENTER OF THE DISCOGRAPHY of conductor Charles Munch are his many recordings with the Boston Symphony, which he music-directed from 1949 to 1962. A new 13-disc Warner Classics set bookends that era. While it far from completes Munch’s extensive discography (he recorded for many labels not included here), it does give us his first and final recordings and presents a fascinating look at his wide-ranging programming style. 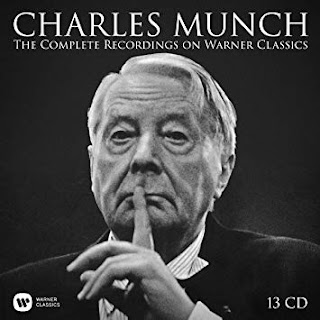 Munch was unique. A renowned violinist who began his professional career as concertmaster of several significant European orchestras, he came to conducting with no specific schooling other than what he gleaned from playing under the baton of others. Never one to over-rehearse a piece, he was beloved by musicians who played for him because of his comparatively relaxed attitude and the passion he’d summon in concert, where the unpredictable result were typically triumphant.

He was born in 1891 in Strasbourg, in an Alsatian region that was variously claimed by Germany and France. Both languages were spoken in his house. During World War I he was conscripted into the German army; when Nazi Germany occupied Paris, he was conductor of two top orchestras in that city and contributed greatly to the French resistance, both financially and in the programming he selected.

One of the most significant of such pieces is Arthur Honegger’s La Danse des morts, recorded in 1941. The cantata was the second collaboration between Honegger and poet (and ambassador) Paul Claudel; the first was an oratorio titled “Joan of Arc at the Stake,” which premiered in Basel in 1938. While there, Honegger and Claudel visited a museum that featured Hans Holbein’s woodcut series, “Dance of Death,” and saw how relevant the images remained. Claudel wrote seven sections, to be performed by narrator, soloists, chorus, and orchestra. As Honegger noted, “Within the text, the entire musical atmosphere was already created. The composer only had to realize it in sound.”

The Société des Concerts du Conservatoire was by then over a century old, an orchestra created to play Beethoven symphonies and other well-enshrined works. When Munch was placed at the helm, he loosened its programming considerably (much to the pleasure of its younger fans and players). When we listen to them playing the Honegger, even through the aged sound spectrum, we’re hearing an ensemble struggling to maintain a way of life against occupation forces, given the very theatrical declamations of Jean-Louis Barrault all the more poignancy.

To further the notion of the superiority of German culture, programs in Paris were to feature as much Beethoven, Mozart, and Bach as possible – and Wagner, of course – which presented a quandary. Music by the long-dead could be enjoyed independently of enforced politics, and, indeed, you’ll find in this set Munch and the orchestra performing concertos by Beethoven, Mozart, Tchaikovsky, and Liszt. There’s also Munch’s only recording of a Bach cantata (BWV 189), which is odd considering that his father was a Bach specialist and Munch adored the works.

But we also find works that, just by virtue of being performed and recorded, asserted subversiveness. Honegger’s Symphonie No. 2, a favorite of Munch, gets a 1944 waxing. André Jolivet’s Les trois complaintes du soldat, written to his own texts, make no mistake in their attitude, and there are new works by Gustave Samazeuilh and Marcel Delannoy. And it’s no accident that Munch chose to make is first recording (of 17!) of Debussy’s La Mer during that time, as well as a revisit to Ravel’s Concerto for the Left Hand.

The earliest recording in this collection, Munch’s first, was a version of Saint-Saëns’s Piano Concerto No. 4, with soloist Alfred Cortot and the London Philharmonic Orchestra, recorded for HMV in 1935. The last come from a series of autumn sessions in 1968, featuring the newly founded Orchestre de Paris and devoted to music by Ravel, gorgeous renderings of the Pavane for a Dead Princess, Rhapsodie Espagnole, the second suite from Daphnis et Chloé, and wonderfully idiomatic performance of the Piano Concerto in G, played by favorite collaborator (and niece to the conductor) Nicole Henriot-Schweitzer. (And, in the wonderful trivia department, the cor anglais solo is by Jean-Claude Malgoire.)

But the set kicks off, as it should with a fiery Symphonie Fantastique, the Berlioz epic that became a Munch signature piece. Although his 1962 recording with the Boston Symphony has long been the top-choice version, this one, with the Orchestre de Paris, recorded in 1967, has glimmering sound, surprising instrumental transparency, and a kick-ass finish. It was Munch’s final studio recording of the piece.

His first, from 1949 and with the French National Radio Orchestra, is also here, and to compare them is to understand how truly original was each and every Munch session (there would be a dozen more recordings of the piece in-between).

What else will you find here? Stereo recordings of Honegger’s Second and Fourth Symphonies (from 1967), a pair of works by Munch’s good friend Henri Dutilleux (the Symphonie No. 2 and
the inventively constructed suite Métaboles), and a disc devoted to the music of Albert Roussel: his Symphonies Nos. 3 and 4, and the CD debut of this recording of his Suite in F.

Munch seemed to glory in concerto recordings. Among the 1960s sessions are cello concertos by Lalo and Saint-Saëns, with soloist André Navarra; in the vintage realm are Bloch’s Violin Concerto in A Minor, with Joseph Szigeti, and the historical oddity that is Mozart’s Violin Concerto No. 7 in D Major, or maybe not, depending on who’s opining. In any event, it’s a charming, old-fashioned interpretation by Denise Soriano, and both of those concertos were recorded in 1939.

There’s plenty of Ravel throughout, but only the one La Mer by Debussy, and Fauré, another Munch favorite, gets only his only recording of the Berceuse for violin and orchestra. And we’re reminded that Munch helped persuade the French to accept Brahms as a worthy composer. They held out for decades after the rest of the world succumbed, but the 1968 recording of Brahms’s Symphony No. 1 makes it easy to follow suit.