DUTCH SCHULTZ IS SUPPOSED TO HAVE buried his $5 million fortune in the Catskill woods; his delirious deathbed confession has sent countless treasure-hunters searching for the stuff and, as far as we know, to no avail. The rumor of a treasure-lode of historic jazz recordings was more credible: Bill Savory had played some of the many airchecks he accumulated to friends, and Benny Goodman even made a successful commercial release of some of the sessions in which he was featured. But Savory remained circumspect about the rest of the stuff. When he died, in 2004, the status – and extent – of his collection was unknown. Six years later, thanks to a campaign among jazz collectors, Savory’s son authorized the sale of the collection to the National Jazz Museum in Harlem. 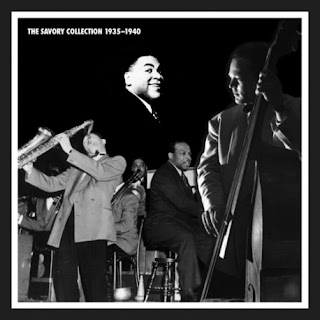 The serpentine tale is recounted by several of its principals in the booklet accompanying the Mosaic Records release of The Savory Collection 1935-1940, but the recordings themselves tell an even more exciting story, The six-CD set begins with an astonishing Coleman Hawkins “Body and Soul” and finish with Lester Young, at his peak with Count Basie. In-between is a hodgepodge of treasures, recorded off-the-air by Savory at a time when you needed uncommon equipment – and very special know-how – to do so. Airchecks differ from studio recordings in significant ways. They’re one-time-only performances, not necessarily mistake-free. They’ve usually got an audience, which often adds a discernible level of excitement to the playing. Records were keepsakes; broadcasts let fans get familiar with their favorites.

In May 1940, Coleman Hawkins led one of two house bands at the just-opened Fiesta Danceteria, a self-service restaurant-cum-nightclub in Times Square. Although it seemed to have a sense of humor about itself – it offered eager ingenues the title of “Miss Cafeteria Society” – the management insisted that the live music remain subdued. Hawkins and his fifteen-piece ensemble were anything but. He quit the place after a week. The recording of “Body and Soul” that opens the set salutes the iconic recording he made a year earlier, but tops it through his exploration of extra choruses, which you couldn’t call subdued. His harmonic inventiveness was phenomenal for his or any other time. Credit also goes to pianist Gene Rodgers, who was on the recording and also appears here with his fluid, Teddy Wilson-ish licks. And then when singer Thelma Carpenter tears into “Basin Street Blues,” there’s so much energy that it’s no wonder this engagement was so short-lived.

What follows keeps to the same performance quality, and it’s amazing how good some of these sessions sound. Savory knew what he was doing from a recording standpoint; preservation of the discs, however, was less consistent, and a depressing number of items was deemed unsalvageable. But I’m glad the decision was made to include a few tracks of less-than-perfect aspect, including sessions featuring Mildred Bailey, Stuff Smith, and John Kirby. Not to mention an “In the Mood” from Glenn Miller, which I believe is Miller’s first appearance on a Mosaic disc [I stand corrected: the first session Miller led was included on Mosaic's Bunny Berigan set]. The restorations were by Doug Pomeroy, a wizard who came out of retirement to take on the task.

Fats Waller is always welcome, especially when captured live, and a 1938 set from his Yacht Club residency has all the fun and variety you could hope for, a mix of originals, negligible pop stuff, and even a solo on “Alligator Crawl.” And then he’s back with a pickup band for a “Make Believe Ballroom” session, also from 1938 – but what players to pick up! Bud Freeman, Charlie and Jack Teagarden, Pee Wee Russell, Zutty Singleton, Artie Shapiro, and the reliable Eddie Condon laying down tunes like “Honeysuckle Rose,” “China Boy,” and “I Got Rhythm,” among others.,

John Kirby’s sextet drove hard enough to merit the term “orchestra,” and six Kirby sessions are sequenced together here, most of them from the 1940 “Flow Gently, Sweet Rhythm” broadcasts, with slightly self-conscious narration by actor Canada Lee. But I can’t enough of the sound of Charlie Shavers’s muted trumpet when harmonically aligned with Buster Bailey and Russell Procope on reeds. Procope would go on to perform “Echoes of Harlem” when he joined the band of its composer, Duke Ellington, in 1946, but the sextet version he’s in here has all the shadings of an orchestral number. But the group’s spirit is exemplified by “Rehearsing for a Nervous Breakdown,” a Shavers number that, like many a Shostakovich work, quotes the “William Tell” overture.

Shavers also features as part of a 1938 Lionel Hampton Jam Session, a small-group setting in which Hampton excelled (there’s an out-of-print Mosaic set of Hampton’s small-group recordings worth tracking down). “Chinatown, My Chinatown” gives us Hamp’s two-fingered piano virtuosity, and Shavers shows his stuff on “Blues,” which features a Hampton vocal. The five-tune set nicely demonstrates the group’s variety and versatility.

There are some one- (and two-) offs in the collection that probably wouldn’t find a home anywhere else. Guitarists Carl Kress and Dick McDonough duet on Berlin’s “Heat Wave” from 1936, reminding us that there were wizards on the instrument back then, and Ernie Caceres plays two clarinets at the same time in a “China Boy” recorded with his violinist brother, Emilio, in 1937. There’s a competing “Body and Soul” featuring a young Bobby Hackett on trumpet, and we hear boogie-woogie pioneer Albert Ammon at the piano (with a small group in 1939) playing – what else? – “Boogie Woogie Stomp.”

Vocal features include the 21-year-old Ella Fitzgerald with Chick Webb at the drums and a CBS studio orchestra with, of course, “A-Tisket, a-Tasket,” as well as “Saving Myself for You.” And Mildred Bailey (also the subject of a long-gone Mosaic set) is featured with Paul Whiteman in 1935 with “My Melancholy Baby” and “Truckin’” and a smaller Red Norvo ensemble in three more songs, including a glimpse of her signature “Rockin’ Chair” before it segues into “More Than You Know.”

Coleman Hawkins wasn’t the only virtuoso tenor sax player from the period, but the short-lived Herschel Evans left a limited legacy. He’s here with the Hampton ensemble doing wonderful things with “Stardust,” and then we get a mother lode of sessions with Count Basie, with whom he played until his death in 1939. We begin at the “Carnival of Swing” festival at New York’s Randall’s Island in 1938, and then it’s a series of sessions at The Famous Door, where Basie had a summer residency that year. An extended “One O’Clock Jump” kicks things off, and we can hear already that Evans had new thoughts about the solo made famous by a previous recording of the tune.

This was a band that could swing like no other, and soaring in front of it all was the tenor sax of Lester Young, who is featured throughout the two CDs given over to Basie’s work. Although there’s not a weak spot in this collection, this cornucopia of undiscovered Young is the high point, and merits the repeated listening this collection deserves.

There’s more, much more (it’s rumored) to be mined from the Savory discs, but it’s very satisfying to have this bounty of treasure in hand. Easier to find, and probably more rewarding, than whatever Dutch Schultz may have left in the woods.