Prokofiev and a Premiere

IN ORDER TO COMMISSION THE DISCOVERY of P.D.Q. Bach’s “Concerto for Simply Grand Piano and Orchestra,” pianist Jeffrey Biegel enlisted sixteen ensembles from around the world to accompany him – and one of those stops was in Troy last Saturday, where the Empire State Youth Orchestra joined him for the work’s New York premiere. 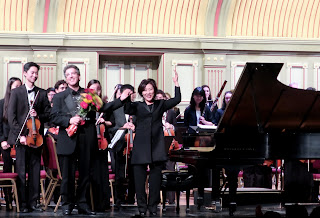 The music of P.D.Q. Bach, thoughtfully discovered by composer Peter Schickele since the early 1960s, has been a reliable antidote to the stuffy conventions of classical-music concertgoing, and gave rise, for a few of those decades, to holiday-season concerts in Manhattan as well as performances elsewhere where the entire event was suffused with laughs. Does the music work as well when free of that context? It does, although it took a little while to loosen this particular audience – but we’ll return to that point.

This was the opening concert of music director Helen Cha-Pyo’s final season with the orchestra, a 15-year run that has maintained the vital tradition of grooming students to be the music-lovers of tomorrow, whether continuing as music professionals or not. The P.D.Q. Bach concerto was a challenging confection that shared a program with a pair of warhorses, but let’s look at the premiere piece first.

The piece is rooted in tradition: it’s a three-movement work in classical form that comes with some performance-art demands. Which isn’t surprising: Schickele’s own P.D.Q. Bach performances were performance art before the term was coined, a child of symphonic tradition and pop cliché with a little vaudeville thrown in. Thus it was that Biegel was unable to get the keyboard lid open without help from concertmaster Julianne Kim (who’d closed it in the first place). The Mozartean opening moments were punctuated with raucous comments from brass and winds, but the first big laugh came with the piano’s entrance – a single note after much delay, prompting a single, surprised HA! from a child in the audience.

Much of the fun comes from the combination of classical-era tunesmithing with modern-sounding modulations, chromatic passages, and blue notes – and touches of outright jazz – that warrant laughs even as they end up seeming not all that out of place. But there are always surprises, as when one of the cellists left her seat to punctuate a passage with a tap-danced time step. (It’s a technique that’s been used by P.D.Q. before, and went on to influence Morton Gould, who wrote a concerto for tapdancer and orchestra.)

The writing for both orchestra and soloist is challenging, and Biegel’s virtuosity was largely matched by the youthful players. Once Biegel realized he had a first-movement cadenza to play, he launched into a display that combined the terrifying syncopations of George Antheil with the showmanship of Chico Marx. The musical prescience of P.D.Q. Bach is always amazing. Skipping ahead a bit, the second-movement cadenza added percussion, something we wouldn’t hear again until Beethoven added a tympani part to that of the piano concerto he arranged from his violin concerto.

More chromaticism and even a walking bass infiltrated the second movement’s lyricism, which eventually broke into outright boogie-woogie. The final movement’s opening moments could have been a Schubert song, but the perky theme instead gave way to a martial sound that found room for a “Light Cavalry Overture” quote. It was a workout; it was a great success.

The program opened with Leopold Stokowski’s arrangement of Bach’s Toccata and Fugue in D Minor (although both the Stokowski and Bach authorships are disputed, part of the reason classical music is so ripe for satire). Cha-Pyo led it with all of its eccentricity intact, the opening toccata careening from Allegro to Lento again and again, the fugue with its own odd transitions. But this is a piece about sonority, testing the brass from its opening bars, challenging the strings with bowing in the fugue. They were impressive.

The real curveball came after intermission, with Prokofiev’s Symphony No. 5. It has to be one of the most challenging works in the repertory because it conceals its complexity behind a pleasant-sounding facade. Nobody in the orchestra is safe: flute and bassoon glide into the opening theme even before the strings can offer some cover, and soon enough the brass are announcing themselves instrument by instrument. That this is a student orchestra was evident from the start, but any flaws were a matter of occasional intonation problems – working as an ensemble, the group had a keen sense of rhythm and dynamics.

The first movement climaxes with a busy percussion section at work, which only warmed them up for the challenges of ensuing Allegro – a scherzo that opened with a beautiful clarinet solo over busy strings. The horns have to give all they have in the middle section, and they did it brilliantly. The opening bed of the ensuing Adagio was a little rocky – it’s a repeated passage of tuba and nervous strings – but coalesced nicely as the winds entered with their lovely melody. There’s a great sense of yearning in this movement, and by the end of it, as the first violins were sent dangerously high on their E strings, there also was a great sense of confidence.

It ends with a wild deconstructed rondo, in which themes are presented, fragmented, then buried beneath a juggernaut of frenzied rhythm. And it must be terrific fun to play, once you master its intricacies. Master them these players did, a tribute to their talents and to Cha-Pyo’s sensitivity to the Youth Orchestra’s ability.

As I noted, these students are tomorrow’s music lovers and, I would hope, are there by choice. Not so some of the parents in attendance, who were there out of duress-tinged obligation. Some talked; some wielded cell-phone cameras with oblivious zeal; a fellow across the aisle used his phone to furtively record the concert. They don’t honor their children with such behavior. And these kids deserve the best they can get.