The Red Book’s Back

ONE OF THE TREASURES of Santa Maria de Montserrat Abbey, situated outside of Barcelona, is a volume of writings bound in red, a collection of devotional music and texts. It was put together at the end of the 14th century – about four centuries after the monastery itself was founded – and has survived, although not necessarily intact, the intrusive waves of history, including a looting of the abbey in 1811 by Napoleon’s troops (the book was out on loan at the time). 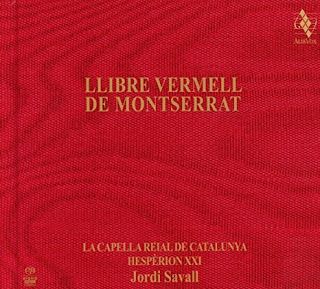 Ten songs are notated in medieval style, songs intended for the pilgrims making regular visits to the serrated mountain to worship La Morenata, the Black Madonna, one of the most celebrated icons in the country. Singing and dance were important to meditation and worship, and the songs in the Red Book note, for example, when a Round Dance would be appropriate.

Mystical and musical clues also inform the manuscript. It’s speculated that there were twelve songs originally, twelve being significant in medieval symbolism, and there are numerological intricacies aplenty in the performance practices these songs invite. These are detailed by Josep Maria Gregori, a Barcelona-based arts professor, in the notes to Jordi Savall’s newest recording of the Llibre Vermell de Montserrat.
Savall, who grew up new Montserrat and first sang some of the songs of the Llibre Vermell while in a local boys’ choir, made a celebrated recording of these songs in 1978. But the new recording, taken from a performance in 2013, brings not only newer technology but also a fresh performing approach. And it includes a DVD of the event, which not only conveys the majesty of these seemingly simple scores but also explains the aural oddities, beginning with the entrance of a quintet of male singers rendering, in unison, “O Virgo splendens.” Recorded in the capacious Santa Maria del Pi, Barcelona, no sound goes unnoticed, so even the most careful footsteps come through. It’s more noticeable on the CD, and once you’ve watched the video, even the CD version becomes transparent. 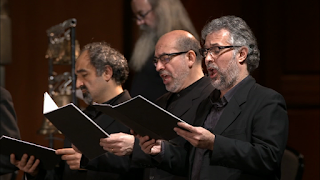 There’s a wonderful transition from the opening “O Virgo splendens” to the canonic version that follows, as voice layers over voice and the texture thickens, but the music’s beauty only grows more majestic and mysterious.

Savall’s instrumental ensemble, Hespèrion XXI, provides not only sensitive accompaniments to the songs but also offers improvisations between numbers, each improvisation featuring one or more of the ensemble’s antique instruments – harp, the English horn-like duduk, santur (hammered dulcimer), viella (Savall’s instrument), and many others. They specialize in the pursuit of a spirit of authenticity, without becoming slavish to its demands.

The eleven-member Capella Reial de Catalunya provides the vocals. They have a contrasting array of voices, yet they blend excellently in monody and become an entity greater than the sum of its parts as they enter the antiphonal realms – so a piece like “Laudemus Virginem,” in seven simple measures (one of which is a rest), progresses canonically into a big, startlingly minimalist sound, with voices or instruments – and, ultimately, both – coloring the sequence at various times. 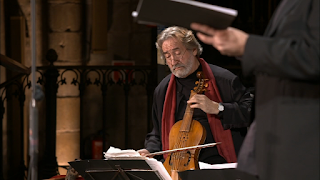 The program alternates between the lively and the more meditative, so it shouldn’t be a surprise when one of the liveliest numbers, introduced by medieval bagpipes (xeremia) turns out to be titled “We Hurry Towards Death” (“Ad mortem festinamus”): “You will be a worthless cadaver / Why do you not guard against sinning?” And then it melts away with a mirror of the opening: “O Virgo splendens” rendered antiphonally and then in monody as the quintet of male singers leaves the sanctuary.