WHEN “CABARET” OPENED ON BROADWAY a half-century ago, it was the edgy exception to a lineup of musicals that included “Mame,” “Sweet Charity,” the sentimental two-hander “I Do! I Do!” and “Cabaret” director Harold Prince’s previous, unsuccessful production of “It’s a Bird ... It’s a Plane ... It’s Superman.” 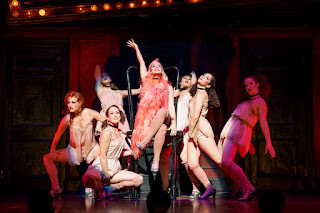 Although we’re now farther time-removed from 1966's “Cabaret” than it was from its setting in 1930 Berlin, the show’s message remains as relevant as ever. And it has struck a chord with audiences through the years: Its original run lasted nearly 1200 performances; the 1998 Broadway revival had almost twice as many shows.

The production that visited Proctors in Schenectady last week is based on the 2014 revival of the 1998 version, itself an import from a 1993 London revival by Sam Mendes at the Donmar Warehouse.

The contrast between the two approaches couldn’t be more striking, and exemplifies the challenge Mendes set himself in adapting the show to a contemporary sensibility. The original emcee was coy and ambiguous, a mirror of or at the very least a metaphor for the gradual coming-to-consciousness many people experienced of the burgeoning Nazi threat.

Now Emcee is downright dirty, crotch-grabbing and spouting single-entendre crudity. He has transformed into the naughty child begging for punishment – a fate that will be fulfilled with a similar lack of subtlety.

This isn’t to take away from Peterson’s performance, which is gloriously over-the-top, fully committed to his mission here. But the character also becomes emblematic of a show that has surrendered most of its subtlety to a sock-in-the-kisser, we’ll-do-the-thinking-for-you approach that’s left with nowhere to go after its initial barrage of debauchery.

Not that this completely mars the experience; not at all. It’s more along the lines of a kid who bursts into the room from time to time to shout dirty words. And as a great lover of dirty words and situations, I’m sorry to see these tools used so thoughtlessly.

One of the better aspects of this production – drawing, in this respect, on Harold Prince’s own 1987 revival – is its treatment of the character of Cliff (Benjamin Eakeley), the American who visits Berlin in order to finish and becomes amorously entangled with chanteuse Sally Bowles (Leigh Ann Larkin). Cliff’s pansexuality, barely hinted at in the original but revealed in the 1970 film version, makes him more believable in this context, and Eakeley, in what can be a thankless role, portrays that well.

Larkin has the possibility of a star turn with Sally, but wisely doesn’t play it that way – the title song isn’t a bellow of defiance but rather an attempted apology, and Larkin finds appropriate, and contrasting, voices for the frivolity of “Don’t Tell Mama” and the ironic resignation of “Maybe This Time.”

One of the gifts of the original was Lotte Lenya in the role of landlady Fraulein Schneider, especially as John Kander crafted his Kurt Weill (Mr. Lotte Lenya)-inspired score. The Weill-like numbers “So What” and “What Would You Do?” demand that kind of performance authority, and Mary Gordon Murray is strikingly impressive in the role, matched by Scott Robertson’s fussy distraction as her suitor, the fruit-vendor Herr Schultz.

The Nazi party has been in front of us all along, we realize, as Cliff’s new friend Ernst Ludwig eventually reveals his affiliation, and actor Patrick Vaill gives that character a too-convincing creepiness, all the creepier for also being a genuinely likeable fellow.

Robert Brill’s set occupies two levels flanked by spiral staircases. Up top is the orchestra pit; below, a playing area that shifts from Kit Kat Klub to shabby flats to fruit market with a few shifts of furniture and lighting.

Music director Robert Cookman leads an ensemble that, except for bass, drums, one of the trumpets, and a keyboard player, is made up of the cast, who scamper up and down those staircases as needed and merited the big hand they got for the Act Two entr’acte.

Too bad the amplification rendered the voices and instruments needlessly shrill. It’s a disease among sound engineers these days, who need to re-learn what those elements sound like in the wild.

In the end, it’s a melancholy musical given an even grimmer finish in this production, daring the crowd to applaud at the end. But applaud they did. As Harold Prince said of the original, “what happened then in Berlin could happen here now.” Let’s be careful with that applause.

Cabaret
Book by Joe Masteroff;
Music by John Kander, lyrics by Fred Ebb
Based on the play by John Van Druten and stories by Christopher Isherwood
Co-directed and choreographed by Rob Marshall
Directed by Sam Mendes
Proctors, Schenectady, May 9, 2017