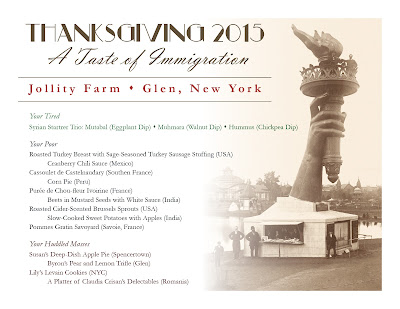 Thus, our trio of Syrian appetizers, featuring a new-to-me mix of grilled eggplant, yogurt, and tahini; a walnut-based dip featuring olive oil and pomegranate molasses, and a lemony take on hummus. 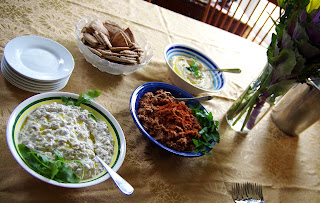 The entree list included beets tossed in a bechemel sauce with cumin seeds, Brussels sprouts (from our garden) roasted in apple cider with walnuts and bacon (I like a continuity of ingredients); and my variation on cassoulet, substituting roasted chicken for duck confit, and featuring Andouille sausage and my own smoked paprika-seasoned pork sausage. 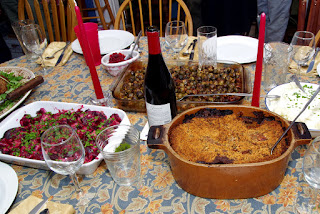 Casserole-based items make the prep much simpler. In the foreground below is a Peruvian corn pie, with a sweetened corn pudding on top and bottom and a filling of beef (sirloin chunks), olives, and raisins. Potatoes au gratin next, starting with spuds cooked in half-and-half before hitting the casserole dish with a mix of Swiss and cheddar cheeses. Beyond that, an Indian-inspired roast of sweet potatoes and apples. 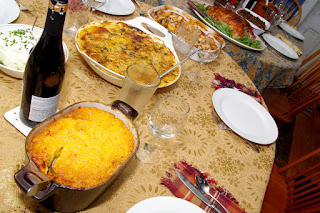 A better view of the sweet potatoes dish, with the turkey along side. After taking the meat off the bones, I made sausage with the dark meat and stuffed it in a butterfly of the breast meat, rewrapped it in the turkey skin, and roasted it. 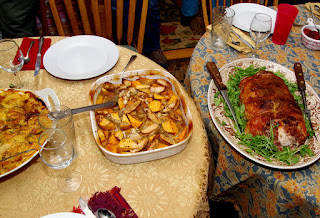 Last Thanksgiving's tribute to Abstract Expressionism is described here, our 2013 Mediterranean menu is here, and the previous 22 are pictured here.