Why I Love to Fly

From the Vault Dept.: Twenty-eight years ago at this time of year I traveled from Chicago, where my parents then lived, to spend Memorial Day at home. (Interestingly, to me at least, the holiday was on the 25th that year, just as it is in this one.) The following piece appeared in Metroland shortly thereafter.

I CAN PROVE that an animal smells fear. I've been sitting for forty-five minutes waiting for my Albany-bound flight to leave O’Hare Airport as runway after runway gets shut down, other flights get cancelled – all due to a nasty, dry thunderstorm, the kind of weather that makes this Chicago field famous for delays. 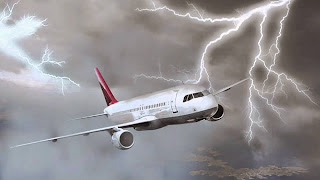 So I sit with my chin in my thumb, elbow on the armrest, staring out the window of a 727. My index finger is pressed to my upper lip.

We are finally assigned a runway position (“We’re number ten for take-off,” the Captain announces) and the plane begins a series of fitful advances. In Chicago, this involves taxiing over a bridge across a highway. Which may help to explain why the city’s traffic is so weird.

It’s nearly ten, or eleven, at night, depending upon whether you’ve prematurely adjusted your watch for Eastern time. Like I anxiously did. And I’m thinking: not much to do in Albany at half-past midnight anyway, wouldn’t mind starting out fresh on a sunny morning. And O’Hare has nice accommodations, right? Sensing my thoughts, the Captain plunges us upward and into the storm.

If you have occasion, as I do, to eat foods with lots of garlic cooked within, you’ve probably noticed the aroma your fingers secrete for many hours after the meal. It’s a pleasant, musky scent, redolent of dinner.

What I began to sniff as the airplane left the ground was in no way related to garlic – or pleasure. First is the terror of witnessing Chicago recede into patterns of white and amber lights, colorful hotels signs dimming as we gain altitude.

I’d pay lots of money to persuade pilots not to turn the plane immediately after takeoff. Bad enough to see the city plummet so far below: who needs to watch as the aircraft banks and the houses down there go into crazed orbit?

Above us is a blue flicker, the short-circuit of Nature: lightning. Then the first few cloud wisps race by the window as if a demented smoker is crouching on the wing. Then nothing but clouds, toylike, the incessant blue sparks making them look like the laughably obvious animation of a B-picture.

Only it isn’t, and I’m scared. The plane convulses in the turbulence. It’s as if some mad Goliath has picked the thing up and thrown it: it’s going to come down, but the question is, how hard? The gods could pick off this plane with a fillip of the little finger. But you’re not supposed to think that.

No, you see the stews calmly crouched in crash position; you watch the silent, terrified people around you; you join in a mass thought-prayer so intense you can almost hear the various deals being struck with the various gods; and you try to put on that Seasoned Traveler look that suggests you’ve seen all this before and it bores you.

(The only thing the real seasoned Traveler knows is not to eat at the airport. Bowels, like airplanes, can take only so much stress.)

Why (you ask yourself) should this particular flight be any different from the hundreds of other we’ll-make-it-through-this-storm disasters we’ve all read about?

The turbulence now is like Magic Fingers gone sadistically berserk, which has happened in more than one motel bed I’ve thrown myself onto. I grow wistfully nostalgic for any event, however unpleasant, that may have occurred anytime before, say, the past five minutes.

And the aroma – that finger, remember, now frozen against my nose – has the stench of disease. “Attack this guy,” it whispers to my prehistoric subconscious. I wrench the finger into my mouth and start to gnaw.

This is helpful. Pain is a reliable, if temporary, distraction from panic. Unfortunately, the two can learn to coexist, as is proven right now.

There are other distractions. A woman behind me is wearing her headset tuned to the Show-Biz channel, prompting her to sing along with “New York, New York” very badly. Perhaps she’s also drunk. Probably a wise idea. Why didn’t I think of that?

I’m too superstitious to share my litany of imagined disaster scenarios. I’m sure you have your own and would probably laugh at, say, my image of me drifting down from 30,000 feet under a parachute constructed in midair from my jacket and shirt.

We’re above or through the storm, and the skies over Albany are clear. Descent begins, and, as always, there’s that final surprise. The damned landing gear. I hear the crunch and grind beneath me (they never fail to seat me directly above a wheel) and, as the mechanism locks into place I’m still thinking I saw a piece of cowling go flying by.

Another irony, and I’ll leave you with this one: How is it, after all the sweat and turmoil I expend in the air, that I still find it in me to kick up a righteous fuss over the wait for tardy luggage?