The Art of the Lute

Notes on the Notes Dept.: One of the most fascinating interviews I enjoyed while writing liner notes for a series of Dorian CDs was with lutenist Ronn MacFarlane, who knows his instrument and its history well. And now that I have a lute-obsessed daughter who is learning to play one, the story below has added family appeal.

“THE FIRST TIME I picked up a lute was at a local music store,” says Ronn McFarlane. “I’d been studying guitar, and I’d already learned a lot about the lute, so I was surprised to discover how awkward it was to hold and how disappointing and difficult it was to try to play. Very frustrating, like a foreign thing. 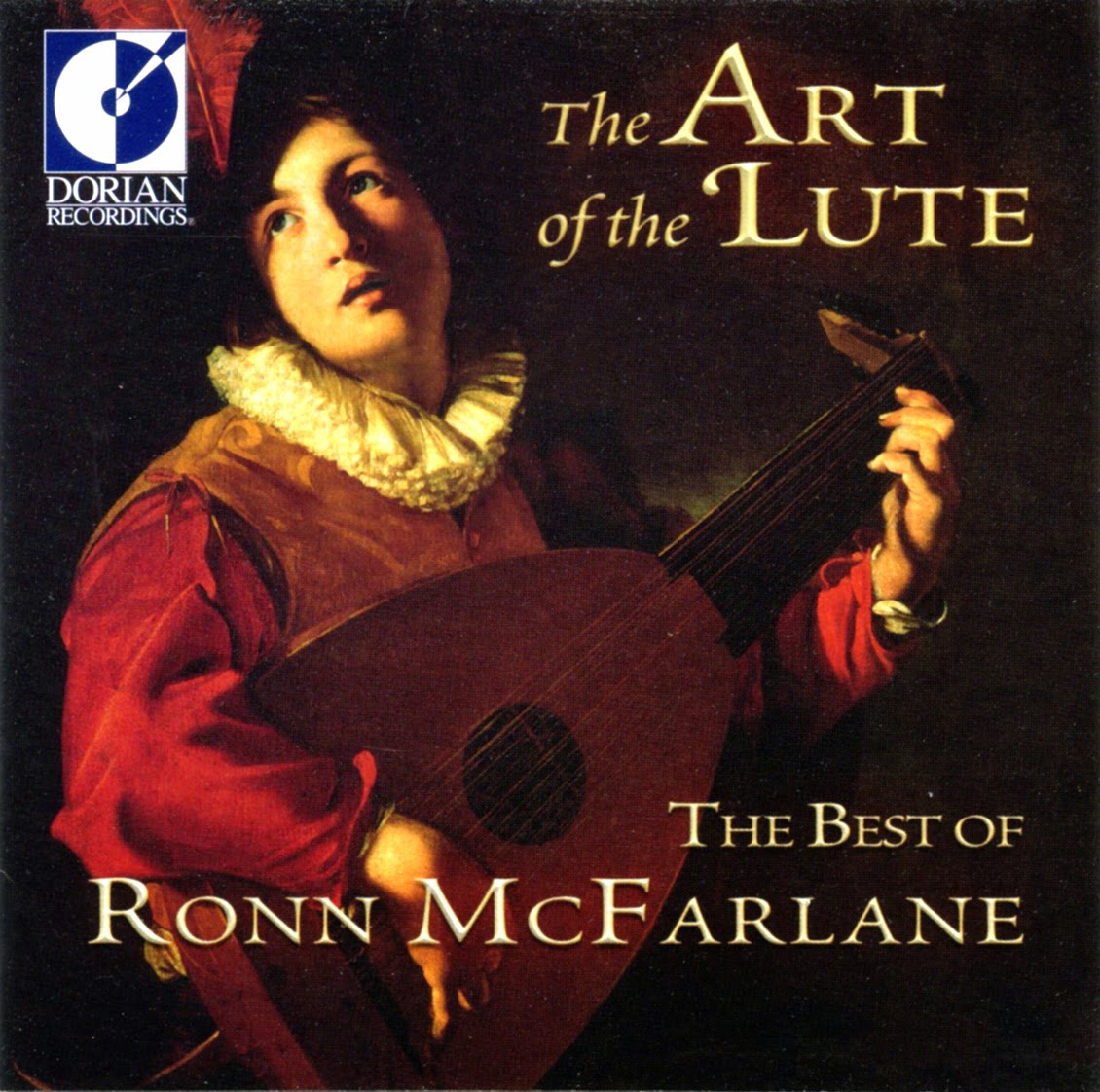 “But I wasn’t dissuaded. I found a way to buy one and worked with it and gradually it became comfortable, comfortable to the point where it became like an extension of my body. And that’s the ideal with any instrument.”

The lute family is varied and multi-national, stretching back to before recorded history. The instruments McFarlane plays on these recordings are based on the European lute, itself based on the Arabic oud, which arrived in Spain in the 9th century during the Moorish occupation. The oldest surviving instruments date from the early 16th century, when the lute repertory also began to make its way into print.

Following the Baroque era, the lute gave way to the guitar; in McFarlane’s case, the opposite transition occurred. “At the time I switched to lute, my guitar repertory was loading up more and more with Renaissance pieces, which I loved. Also, there was something about the lute itself that had a magnetic pull. It seemed to be a natural instrument for me.

“So I thought I would do as Julian Bream did, and play the lute in the first half of a program, then classical guitar in the second half. I practiced the lute for about six months with that in mind, but finally I just had to go with the lute and become a lute player. As much as I loved the guitar, I was that much more enchanted by the lute.”

McFarlane’s passion for music began in an unlikely place: a school cafeteria in Maryland. He was 13, and during a school activities day he saw a performance by a rock band of fellow students. “I’m sure it was a terrible band – we were all teenagers. And they were playing ‘Wipe Out’ by the Surfaris. It was one of those moments when suddenly everything changed for me. I thought it was the greatest thing I’d ever heard. And, because these were my classmates playing it, I thought: I can do that!

“I got a guitar and practiced an unreasonable amount, the way only a 13-year-old can do. I played rock music for a few years, but eventually I was studying classical guitar in a conservatory while supporting myself by playing in rock bands.”


Repertory on this recording dates from some of the earliest published collections up through the Baroque era. In choosing these selections, one of McFarlane’s aims was to show the variety inherent in the repertory he’s recorded.

“It’s a cross-section of styles,” he says. “I chose performances that were colorful or interesting or distinctively mine, at the same time looking for a combination of pieces I thought were strong. And, to a large part, these are simply my own favorites.”


THE FIRST FOUR SELECTIONS date from around 1720. “I started with a chunk of Baroque music because it’s music I love very much and it just seemed like a good opening.” The opening Prelude by Bach is best known as part of a partita for solo violin, but it also has turned up, orchestrally, in one of his cantatas (not to mention as the basis for a wickedly difficult Rachmaninoff piano transcription). The other two Bach preludes are also of uncertain instrumental provenance, but the Prelude in c minor, BWV 999, was probably originally intended for the lute. Sylvius Leopold Weiss, on the other hand, was a composer-lutenist whose “Ciacona” is very idiomatic.

At the heart of the Renaissance pieces that follow is the passamezzo, probably deriving from the Italian for “step and a half” and referring to a dance form based on a recurring sequence of eight chords. This progression, says McFarlane, “pops up again and again in the 16th century. ‘Greensleeves’ is based on a passamezzo, and hundreds of other pieces use it as the basis of variations and sometimes improvisations. It’s analogous to the modern 12-bar blues in that despite the amount of music that’s based on the progression it’s still incredibly varied.”

An invitation to improvisation is offered by the “passemeze” by Adrian LeRoy, published in the mid 16th century. “LeRoy wrote music that goes only twice through the progression, so the rest of it is my own.” Two passamezzo forms by Hans Newsidler follow.

Ballard’s “bransles de village” takes a different form – “bransles” is pronounced “brawl” and in fact refers to a dance that was thought to be excessively boisterous. “Forlorn Hope Fancy” by Dowland “is particularly intense and acerbic,” says McFarlane. “This is Dowland at his greatest and most desperate.”

McFarlane is particularly excited about Scottish lute music, and has recorded two CDs of that material. Five selections are drawn from the Sir William Mure of Rowallan Lute Book (1620), the earliest surviving collection of Scottish lute songs, drawing tunes from anonymous sources. The next two selections come from the Balcares Lute Book (ca. 1705), which seems to have been collected by a lutenist named Beck, who included English and French tunes with his transcription of what probably were Scottish fiddle songs.

“John Dowland,” says McFarlane, “is one of my favorite composers, and ‘Captain Digorie Piper’s Galliard is one of his most noble, beautiful galliards.” A galliard is a fast-paced 16th-century dance in triple time, and Dowland honored many acquaintances by affixing their names to his dances. “But it’s strange that he should dedicate one of his loveliest galliards to a wanted criminal.” Diggory Piper, a native of Cornwall was a 16th-century pirate who was very unpopular with English officials. “Dowland very much wanted a position at the court of Queen Elizabeth, and made a strange move in dedicating this piece to him.”

“My Lady Hunsdon’s Puffe” is an almain (allemande), a moderate dance in 4/4 time with a quick upbeat. “Lachrymae” was Dowland’s most famous piece, “and it exists in more than 30 versions in manuscripts and publications. He made a number of versions himself: there’s the lute song, ‘Flow My Tears,’ and also one for five viols titled ‘Lachrymae for Seven Teares,’ in which seven different settings of the tune begin the same but veer off musically as if he’s recomposing the piece.” By contrast, “Mrs. White’s Nothing,” in a gigue-like meter, “is a light character piece that shows a different side of Dowland.”


MCFARLANE FIRST HEARD Scottish lute music in 1980. “I’d gone along with the lute for years without knowing there was a Scottish repertory, but five or six hundred solos survive.” His first Dorian solo recording, “The Scottish Lute,” collects 56 pieces from various lute books. The seven selections on this collection are drawn from the abovementioned Rowallan book and the Straloch Lute Book of 1627.

The “Gypsies Lilt” has an arresting feature: “It’s a rather amazing chord that’s repeated a few times. Going from the bass to the treble, it’s a dissonant B-flat, A, E-flat, B-flat chord, and it’s quite clearly written each time. In his book Scotland’s Music, John Purser writes that he thinks the point of the piece is the gypsy casting a spell over his audience – gypsies were regarded with a certain awe and even fear at that time and were thought to have magical powers, and this dissonant chord probably is a musical allusion to those darker powers. The chord doesn’t turn up again in music history for a couple of hundred years, so it’s quite unique.”

Four Renaissance dances conclude this CD. Two are drawn from the hundreds published by Pierre Attaignant, these dating from 1530, and the last two are duets by Joanambrosio Dalza. “The second instrument keeps a drone going, although Mark Cudek, who plays that part, is very inventive, playing it in different registers and with different characters.

“These two pieces give a kind of a window into 15th century practice. In 1508, when they were published, that style of piece was already old-fashioned. But by using only one chord all the way through there’s a kind of primal force that’s very effective.”

McFarlane notes that the old style of the lutenist-composer “is analogous to the current breed of singer-songwriter. Everyone had an individual style that was easily recognized.” Continuing in that tradition, he’s writing his own pieces for the lute, “and my next recording project will be an collection of original works. I’m committed to trying to extend the lute repertory – to bridge that 200-year gap when nothing was written for the instrument.”

Ronn MacFarlane: The Art of the Lute
Dorian Recordings DOR-90022